First and most importantly, I would like to welcome an esteemed new member to the IM HEAT team. Jenny Coico is our copy editor! God bless the woman who has to deal with my prose 5 times a week. She has been editing everything you’ve read this week, and is probably the only reason it is sometimes not physically painful to read it. Welcome Jenny! Now, get back to work, this stuff isn’t going to make itself coherent.

Ok, so tomorrow we’re going to tackle a new trial of PCSK9 inhibitors, which is super interesting. I get all nerdy and excited just thinking about writing it up for you. But before I tell you that story, I think I should tell you this one. For some of you this will be basic, but read through it anyway. Maybe it can help you think of existing concepts in new ways.

Do I Really Need a Calculator For This?

There’s no question that PCSK9 inhibitors are going to revolutionize lipid lowering therapy. With an average LDL decrease of about 60%, they’re even more effective than statins at making the numbers nice and pretty. But the lipid profile is only part of the CAD story. Ever since the ACC/AHA published revised cholesterol guidelines in 2013, the standard of care in selecting patients for lipid-lowering has been to eschew LDL cutoffs in favor of pooled-cohort based estimation of 10-year risk to guide selection for statin therapy. The ATP3 guidelines that we relied on prior to this simply use LDL levels as a stand-in for risk — now that we have accurate pooled-cohort data that predicts both incident and subclinical CAD better than ATP3 criteria, it’s only sensible that we’ve made the switch.

But let’s take a step back — why are the criteria for starting a preventative intervention risk-based in the first place? Well I could tell you, but it’s easier if I show you. I mean, what good is an explanation without some graphs? None, I say. But then, I love graphs. Look at this one, for instance:

For a given undesirable event, population A has a 5-year risk of 20%, while population B has a risk of 10% over the same period. Don’t feel too bad for population A — population B is only healthy because of clean living, so population A is way more fun at parties. Now, let’s do some science and mess with them. 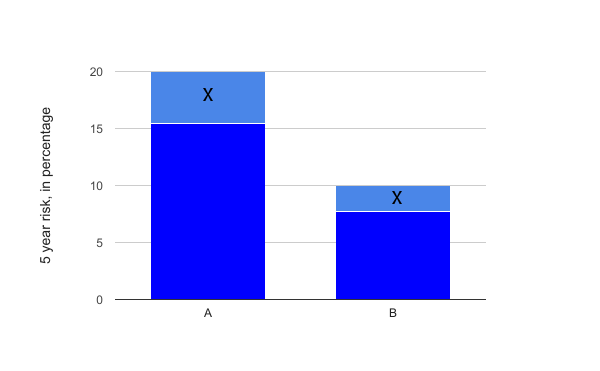 Each group underwent a 23% reduction, but the absolute benefit was not the same. Because our number needed to treat (NNT) is related to our absolute risk reduction, we need to treat more than 43 patients in group B for five years to meaningfully prevent one event, while group A has a NNT of just 22. Our NNT varies inversely with baseline risk. So which population can you help with intervention X? Both, just at different rates? Neither, because all I’m doing is drawing graphs and it has no bearing on real life? Wait don’t answer yet, just… just let me have ONE more graph. After all, we’ve talked about benefits but haven’t talked at all about risks.

Here, I’ve added in a hypothetical 3.5% risk of major adverse events from the given intervention. Because adverse event rates do not typically vary with the same risk factors as the primary event in question, the number needed to harm is generally equal between two intervention groups. The left column of each set is the reduced risk plus the harms of therapy; the right one is the original risk. Group A is doing better overall with the intervention as they get more benefit than harm; Population B are the losers here.

“Now,” I hear you say, “you just doctored the data to make group A benefit and group B have a net harm.” Well yes — that’s the point! Selecting our patients based on risk allows us to tweak the number needed to treat until it’s greater than the number to harm. Because the number needed to harm remains relatively constant, once we know the relative risk reduction of an intervention it’s relatively simple to pick a risk cutoff that makes an intervention a net benefit. So don’t complain about having to plug your patient’s risk factors into a calculator to see if they need a statin. We do it because it makes sense, and it’s not going anywhere.

Tune in tomorrow to see how this influenced a trial of a novel PCSK9 inhibitor. And do get excited — it’s not every day we review a New England Journal trial of a drug that was discontinued before even making it to market…

3 thoughts on “Cholesterol, like age, is just a number: A brief discussion of risk-based primary prevention”

Leave us a message below, e-mail imheatpod@gmail.com, or tweet @imheatpod.